Believe me, I get it. Trump sucks.

Trump is easily the worst president in the history of these disunited states. The rabid zealots in his legion of zombified sycophants suck too.

Each day goes by and the President and his gang of cheapjack cronies fleece his own mindlessly loyal flock even more than the day before. The old adage about the rapid-fire birth of suckers becomes more astute than ever.

One of their favorite gaslighting tactics is to brand any criticism of their hero as “Trump derangement syndrome.” Their hero is never wrong. If one of his utterances seems indefensibly stupid, or if he is demonstrably caught in a bald-faced lie, these are not sins of omission but simply bold and ingenious gambits in his grandmaster’s great game of extradimensional chess.

I am here to tell you that something like Trump derangement syndrome is real, very corrosive and needs to end now.

Let’s call it misotrumpism, and all-consuming hatred of Trump. We no longer have the luxury of allowing Trump so much space in our hearts and minds. Indeed, we have already suffered serious consequences from this mass anti-Trump hysteria.

The misspent energy raging on Trump for his inept handling of the coronavirus crisis has been abysmal. The fact is we were going to get slammed by this bug no matter what. The virus seemed to have us in mind when it manifested itself into being inside that doomed Wuhan wet market pangolin.

Large swaths of America fall within the virus’s favorite climactic zone for reproduction and transmission – generally speaking, the latitudes between 30 and 50 degrees from the equator. Given this virus’s long asymptomatic dormancy period, not even a Voltronized hydra of Abe Lincoln, FDR and Willie Nelson could have spared us multiple outbreaks from coast to coast.

Where Trump has failed is mostly symbolic. Americans look to their president to reassure them, to seem as if his hand on the wheel of the ship of state is steady.

But instead of Lord Nelson, we find ourselves at the whims of Captain Queeg, the deranged commander at the heart of “The Caine Mutiny.”

Ignoring Trump as much as possible has been my guiding principle for the last couple of years, because the alternative is so much worse, as we just saw in the Democratic primaries.

This man never won a single primary in three presidential campaigns until the DNC put training wheels on his bike by getting his foremost moderate opponents to all drop out in unison.

It’s gotten so bad in some quarters that it’s almost a prerequisite that you ritually condemn Trump before you speak on any matter of national politics. Truly, Trump is cursed but where do you think the Dems have a chance on flipping the Senate?

The billionaires win again. They lost the Republicans to a mob of yokels and are now useless to them. They are an embarrassing lot to associate with these days anyway; too obvious in their bigotry.

So why not just leave them to their own devices and just take over the Democratic Party instead? The idea that Democrats represented the party of the rabble pretty much ended when Bill Clinton finished off the American working class with NAFTA.

Billionaires are in a win-win situation. Trump has been a godsend. They can’t lose this November. They might prefer Biden putting a happy face on their continued plunder of the American people, but Trump will do in a pinch.

As for the rest of us? We’ve been fleeced, hornswoggled, sold down the river, conned and Barnumized. Again.

If you can’t bring yourself to vote for Joe Biden in good conscience, perhaps you can rectify the results of the last election and do the bidding of your masters in the DNC in one fell swoop!

Let the Grackle be the springboard for righting the wrongs of the past four years. The editorial board of this publication as a whole officially endorses a write-in vote for Hillary Clinton as your choice for the next president of the United States. 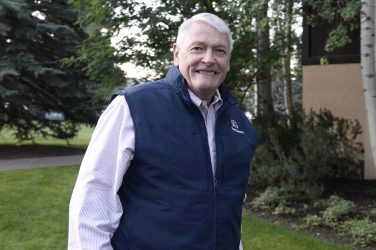 Live Nation, iHeartRadio, SIRIUSXM, Ticketmaster, and Pandora are Now All Under the Control of One Man.

The Justice Department has green-lit a proposal by Liberty Media to increase its holdings ...