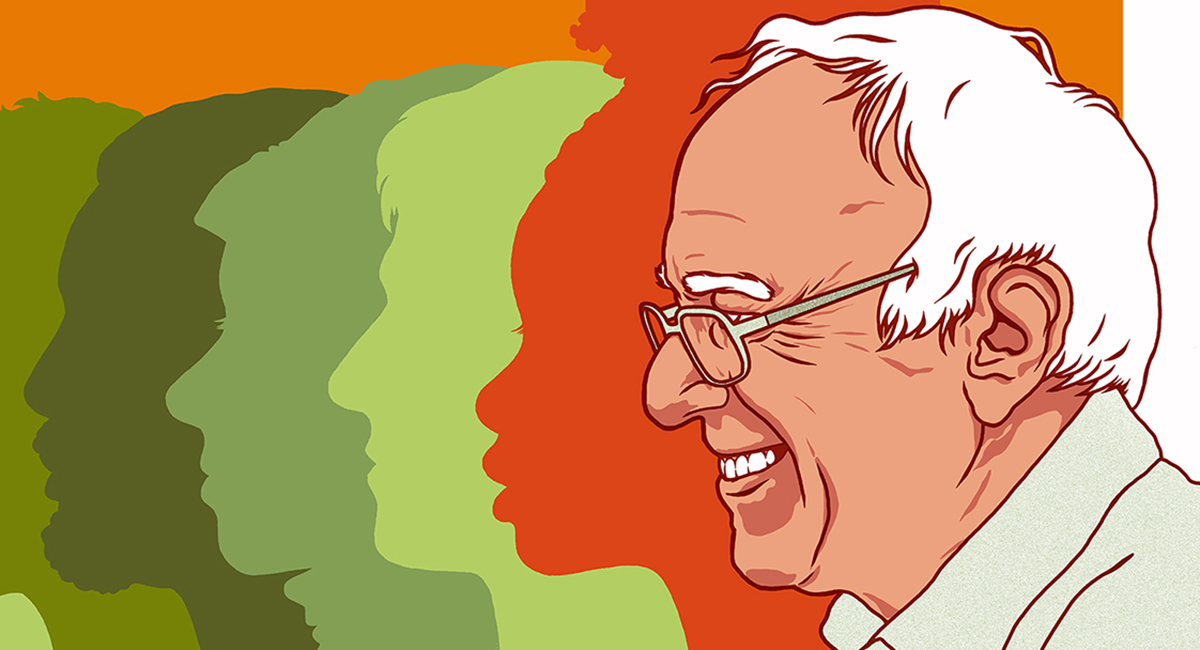 ‘Leading now’ means directly addressing the rift between progressives and conservatives within the Democratic party. It also means facing the reality of millions of unaligned voters who may very well find themselves at a loss to find a preference between one rich old white man and another… or even a reason to vote at all.

Bernie Sanders did the right thing.

He did the right thing in 2016, he did the right thing in 2020. In neither case, did he receive respect, appreciation, or even acknowledgement from pearl-clutching Democratic bluehairs who couldn’t quite get past the whole ‘socialism’ thing — or the conviction that it was Hillary’s ‘turn’ in 2016. I haven’t heard anyone espousing similar entitlement on Biden’s part in 2020, but that doesn’t mean they aren’t out there — because, after all, ‘entitlement’ is what the Democratic party does best.

No, I am not talking about ‘entitlement’ in the sense Republicans use the word to stigmatize the idea that there is anything approaching a basic human right to basic human needs. I’m talking about the entitlement of privileged elites to do whatever it takes to ensure the perpetuation of their own entitlement… regardless the cost to anyone less privileged.

That unerring sense of entitlement guided the Democratic Party’s National Committee in 2016 to guarantee the highest possible levels of cooperation between itself and their candidate of choice, as well as collusion of funding, and quite possibly outright rigging of key state primaries.

In 2020, the same sense of entitlement led to the Iowa Caucuses almost being ruined as a result of the decision to tally results via a mobile-device application developed by a consultancy made up of Clinton 2016 campaign staffers. This ‘app’ was so poorly written and tested it was unable to qualify for inclusion in either Google Play or Apple’s App Store. It failed disastrously, and was later found to be riddled with security flaws. Whether these flaws were the result of incompetence or malign intent remains highly debatable.

That same sense of entitlement orchestrated the strategic withdrawal of minor moderate candidates when it best served the candidacy of Joe Biden. That same sense of entitlement led Biden himself to side with the conservative victory in the U.S. Supreme that prevented either the postponement of the Wisconsin Primaries, or an extension to absentee ballot deadlines that would have enabled voting by mail. It probably would not have made a difference, but it might have — and what’s the lives of a few voters, anyway?

In any case, it is now indisputably Joe Biden’s ‘turn’. As the presumptive nominee seven months in advance of what will be the most dangerous election in United States History, Biden has an opportunity to lead now… if he will take it.

‘Leading now’ means taking on the dangerous rhetoric and failed leadership of Donald Trump — directly and unequivocally. ‘Leading now’ means directly addressing the rift between progressives and conservatives within the Democratic party. It also means facing the reality of millions of unaligned voters who may very well find themselves at a loss to find a preference between one rich old white man and another… or even a reason to vote at all.

Biden’s opportunistic announcement that he would ‘place a woman on the ticket’ doesn’t even come close to addressing this issue. Choosing Elizabeth Warren as that woman would be a good start… but only a start. Finding a real and substantive advisory role within his campaign for Bernie Sanders would go even further… unlikely as any such thing might be.

Biden’s real challenge is to connect in an effective, meaningful, way with the millions of voters his party has left behind after decades of dedicated pursuit of the corporatist donor class and the privileges associated with that pursuit. Defeating a president who narrowly escaped impeachment in time to preside over the mishandling of a pandemic and the collapse of the U.S. economy should be easy — but it should have been even easier four years ago to defeat a discredited reality TV star with a long history of bankruptcies and no governmental experience… but it didn’t exactly work out that way.

Biden’s bigger challenge, if he should be so incredibly fortunate as to defeat Trump, is to find a way to not just reconnect the Democratic Party to the people it has left behind — but to reconnect a demonstrably failing system to the people who are trapped in that system. Even if we are so lucky as to be looking back in 2021 to the near-disaster of COVID-19 and the near-failure of American Democracy, we will not — within the bounds of the present system — be any less susceptible to future such failures.

COVID-19 did not simply lay bare the fundamental incompetence of Donald Trump. It has revealed the fundamental fragility and incompetence of the system that made Trump possible in the first place. In order for Joe Biden to be a credible alternative to the cronyism, incoherence, and incompetence of Donald Trump, Biden has to champion an alternative narrative that transcends these things. He cannot do it on his own — he is as much a product of the current system as is Trump. If he has the wisdom to reach out to others with whom he may not agree — even as Lincoln did in his own crisis presidency — then we may see a resurrection of the reasonably just and reasonably honest republic the United States has been… more often than not.

If not — if Biden either loses this contest, or wins without seeing the need to rise above the status quo that created him — there is no small likelihood that those not taken by the latest novel coronavirus will live to see the end of the American Republic.

And that may, perhaps… not be a bad thing.