A society where people want bad things to happen to their neighbors is a society on the precipice of collapse.

Never before in human history have we so frequently and efficiently peered into our neighbors windows. Our days are now filled with hours of scattered glances into other people’s lives via technology. And as with many technologies, every step in the direction of human progress is mirrored with a potential step backwards. The continuous feed of other people’s lives into our consciousness has helped to usher in an age of polarization, self-comparison, and eventually, ill-intentions against our neighbors. The American discourse was already teetering on the edge of perverse intractability before the pandemic came along. Schadenfreude, or what the Guardian called ‘Spitegeist’, now has a more fertile landscape than ever before. The confluence of pandemic and economic uncertainty has made 2020 America an ugly place to be.

“Dehumanization appears to be at the core of schadenfreude,” says Shensheng Wang, Emory University psychologist. In 2018, Wang published a review in New Ideas in Psychology unpacking this concept from three decades of social, developmental, personality and clinical research. The study ultimately concluded that schadenfreude is antagonistic to empathy. “ Concerns of self-evaluation, social identity and justice are the three motivators that drive people toward schadenfreude. What pulls people away from schadenfreude is the ability to feel empathy for others and to perceive them as fully human and to show empathy for them. “ But national survival under the specter of Covid-19 demands empathy. Always true to form, Americans of just about every political and social ilk have come out wishing ill on their countrymen.

In the last several weeks, we have seen people of every walk of life relish in the fact that certain others who do not share their worldview have contracted the Coronavirus. For those that are virus-free, they wish it upon them. Social media celebrations have been made upon the news of Rand Paul, Tom Hanks, Idris Alba, Chris Cuomo, Pink, and even Kevin Durrant contract coronavirus. Unless your name is Lebron James, you have no use in any horrible fate befalling Durant.

Justification for such feelings comes from two primary sources says Wang. Naturally, the woke crowd rationalizes it’s ill-will with a moral imperative much the same way religionists. Hey, Atheists want divine justice too. “Schadenfreude to a concern for social justice and the feeling that someone dealt with misfortune received what was coming to them ” says Wang. The other justification is enjoying seeing those they perceived as strong to ‘have their wings clipped.’ The review calls this “ a concern for self-evaluation, and a lessening of painful feelings when someone perceived as enviable gets knocked down a peg.” So yeah fuckhead, you wished death upon someone because they do not share the same nuanced, economic philosophy as you or you are plain envious.

“The misfortunes of others taste like honey.”- Japanese Proverb

Recently, I observed an otherwise judicious and exceptionally well-read artist make a post about Rush Limbaugh. “ Rooting for the cancer” the unnamed artist boasted.  I want to be absolutely succinct here: Rush Limbaugh is an asshole of fascinating pedigree. He says ugly shit for sport and makes a hell of a living doing it. Not my kinda dude. But you never defeat Rush Limbaugh by becoming Rush Limbaugh. You feed him and his ilk by emulating their actions. Again, this very well may tie back to the notion of how the woke left has adopted the same tactics religious American puritans have always used. But that is for another grouchy article some other grumpy day.

Stop pretending like you love the poor, you only hate the rich

#EatTheRich was a popular hashtag well before this pandemic. But the dickhead masters of the universe are giving folks more than ample reason to put that sentiment on blast. Class divisions are only exacerbated by a stalled economy and a sudden panoramic urgency to our healthcare system.  The lion’s share of stimulus money has gone to companies that could perhaps do without it while mom and pop shops clammer for what few federal dollars remain. Not to mention, US Billionaires have gotten 280 Billion richer since the start of Covid-19.

But let’s really unpack ‘#eattherich’. First and foremost, I have only seen members of the  upper middle-class use that hashtag. Yet the origin of the saying is telling. Originally uttered by famed french philosopher Jean-Jacques Rousseau, the message came as a warning, not a direction. “When the people shall have nothing more to eat, they’ll eat the rich” said the forefather of the concept of the Noble Savage.

But what would generate such a dispassion for the wealthy when so many of those using #eattherich have full bellies? Biologist and Evolutionary Theorist Eric Weinstein laid it all out rather eloquently on the, ahem, Joe Rogan podcast some months back. “ “ If you look at this biologicallyIt tells us a lot. We know this from careful study, people are motivated by the degree of inequality more than they are by the absolute level of well being. There is a very good evolutionary reason for this. If you are working on one piece of land and your neighbor has the adjacent piece of land and they are doing twice as well as you, it is because they know something you don’t. becoming focused on what they are doing and not what you are doing is a rational thing.  So you watch them to figure out what they are doing right so you can do it. In the modern environment, this is a catastrophe.  So who are your neighbors? Well you have a box in your living room that gives you a totally artificial portrait of other people. You are being triggered into thinking that there is something wrong that needs to be fixed. “

Schadenfreude is a team sport

A university study in Würzburg in Germany in 2015 found that football ( we call it soccer ) fans smiled faster and wider when their rival team missed a shot, than when their own team fucking scored. The same reverse moral-symmetry has taken hold in American politicking. As the country becomes transfixed with every utterance Trump makes regarding the virus, some may be wishing more for failure by the president than a collective national success. Look, I love hating this guy. But if you think the wrong person has their hands on the steering wheel of the car you are in, either you get someone to replace them or put a knife to their throat to force them to drive like they have some damn sense. You just don’t cross your fingers that they drive off the freeway and burst into flames. Instead of revelling in Trump’s every failure, why not hope the people around him do cleverly coerce him into making sensible decisions? Shouldn’t we put every intention into the universe for Fauci to skillfully persuade moron Trump despite this all being a shitshow of historic proportions? Again, Trump might be the world’s biggest shithead but what do we gain from him continuing to shit the bed? Surely not a re-evaluation from his supporters.

Unfortunately, partisan divisions have just about everyone dug into their trenches of confirmation bias. Conservatives are seeing this as proof positive of a left that wants a nanny state. The left reads the situation as vindication that the modern American condition necessitates a vast social safety net. Everybody walks away from this thing with their pre-existing world view even more calcified as well as proof positive that the other guy is the source of all misery in the world. Predictable.

Is this vitriol we have for our fellow humans innate? Have we evolved to become inherent assholes?  According to Wang’s co-author Philippe Rochat, maybe.

“Research on infants also points to the early roots of intergroup aggression, showing that, by nine months, infants preferred puppets who punish others who are unlike themselves.

“When you think of normal child development, you think of children becoming good natured and sociable,” Rochat says. “But there’s a dark side to becoming socialized. You create friends and other in-groups to the exclusion of others.” Naturally, this does not bode well for America. In a time where our survival may rely on us coming together, we are probably in deep shit. 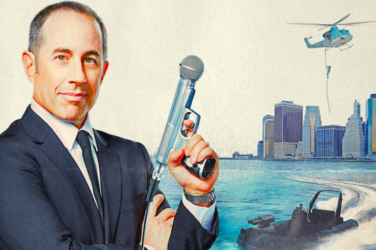 For those who may have missed it, Netflix has just released a brand-new comedy ...