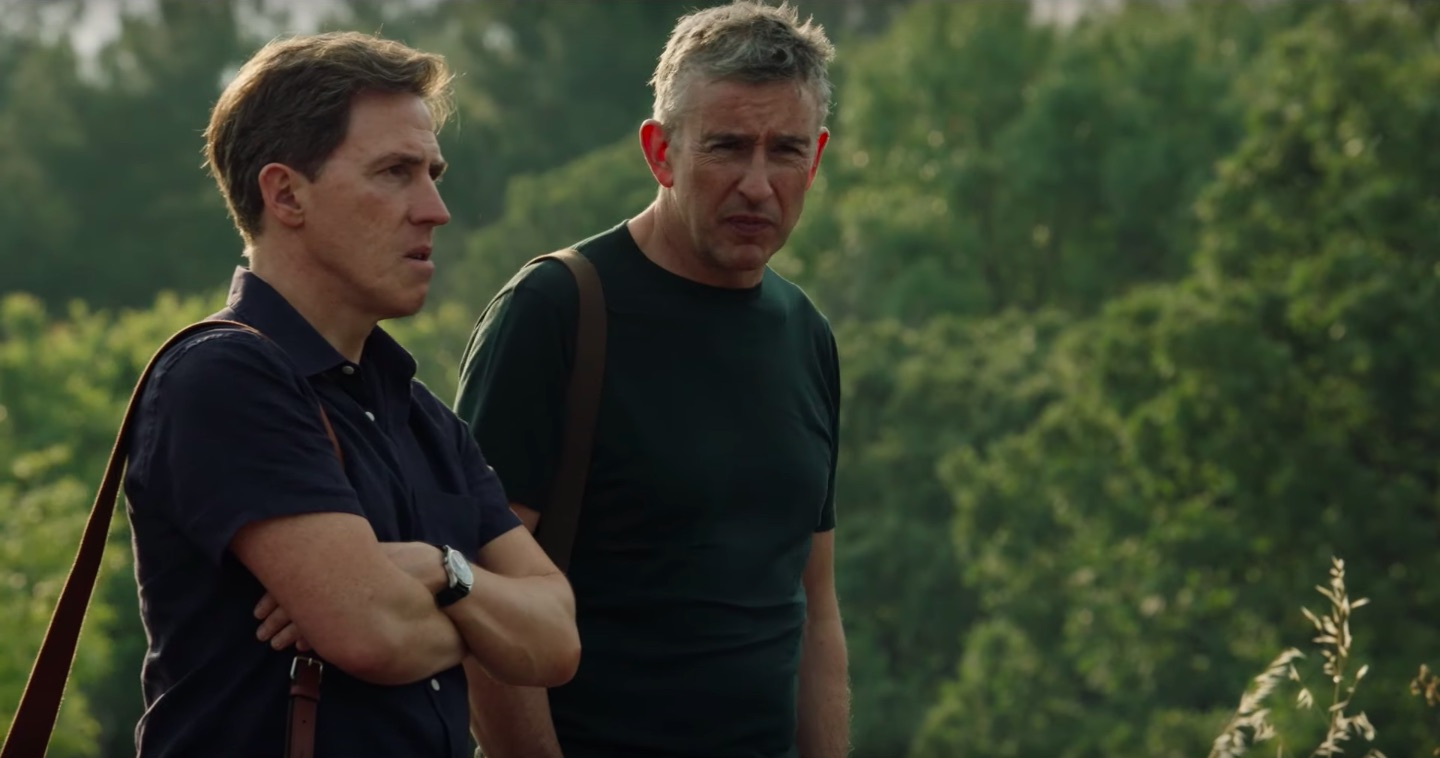 Not sure if there is a precedent for the kind of sequel “A Trip to Greece” presents.

Earlier this year I became aware of the May theatrical release of one of my favorite series of films – the latest installment of “The Trip” starring Steve Coogan and Rob Brydon, and directed by Michael Winterbottom.

I suppose with the streaming release of “The Trip to Greece” it’s like having my cake and eating it too. Only watching a premiere film in your living room is like watching late night talk show hosts trying to be funny by telling jokes without a live audience. They arch their eyebrows and you’re supposed to laugh. There’s something missing.

So it goes. Certainly I will among the first sitting in a darkened movie theater when they finally open showing something other than “Grease” or “Sing.” Only the first time somebody in the audience wheezes, coughs or sneezes I’m calling the National Guard.

Drive-ins have become a popular retro event. You can’t knock success. The Sawyer Yards Drive-In in the Heights has sold out nearly every night on their calendar for the next month. I drove by earlier tonight and they were packed. But the screen was stretched across grain silos and you could see the shape of the silos molded onto the screen.

Texas loves their pickups and a good amount of the cars were trucks, parked backwards, with the flatbed housing a couple of three viewers, with lawn chairs in front of that rounding out the entourage.

I’m reminded of the time I went to see the opening day of “The Walk” in 3D-IMAX at the Regal Marque. There were less than ten people in the audience, less than five-percent capacity of that cavernous theater. You choose your seat when you purchase your ticket. Naturally everyone in the theater had bought seats in the sweet spot, the middle of the theater. Everyone was literally congregated on two rows, booger-flickin’ distance from each other. Meet the new social distancing, the same as the old social distancing, which is hardly any distancing at all.

The Trip to Greece

If you’re not up to speed, the original “The Trip” followed real life friends/actors/competitors Steve Coogan and Rob Brydon on a tour of restaurants that Coogan was hired by a prestigious British rag to review. Along the way they criticize each other and do spot-on imitations of famous actors.

Not sure if there is a precedent for the kind of sequel “A Trip to Greece” presents. Yes, this is a sequel with a built in audience with the same stars and director as its previous three iterations. Come for the greatest hits (Roger Moore/James Bond imitations) and stay for the family drama, which may or may not be real.

But “The Trip” films are not sequels in the sense that Bond or “Mission: Impossible” films are sequels. Also, and this is a pretty big leap of faith perhaps on a Kierkegaardian scale, “The Trip” series are Americanized in the sense that we’re watching a two-hour movie that’s been whittled down from a three-hour British television series.

IFC is the distributor and knows this is one of their tony titles. Earlier this year Sony Pictures Classics released another Winterbottom/Coogan collaboration “Greed.” SPC actually changed the end credits sequence of that film for the American rollout that played down the names and companies of the actual billionaires that were being lampooned.

I needn’t remind the intrepid viewer that the previous installment “The Trip to Spain,” ended on a kind of cliffhanger where Coogan has his vehicle commandeered by some unfriendly chaps in the desert.

Not to worry as this is never referred to in the new film, which in fact starts with a cameo appearance by Kareem Al Kabbani, who played one of the Syrian refugees seen living on the beach in “Greed.”

Here Al Kabbani is being given a lift by Coogan and Brydon back to his refugee camp. It’s just one of more than a few bittersweet moments that define the shift from outright hilarity to a sort of dramedy that was not present in previous films in the series.

Brydon tells Coogan that he watched “Stan and Laurel” (for which Coogan was nominated for Best Actor) “on my BAFTA screener and only paused three times to go to the kitchen.”

Then comes a laugh out loud bit where the duo perform Tom Hardy as Bane doing Stan Laurel. The boys also get into some serious recreations of Dustin Hoffman and Laurence Olivier in “The Marathon Man” in between a tribute to the song from Sutherland Brothers and Quiver “Sailing,” which was a hit for Rod Stewart. “I’ve known women who’ve never heard of Rod followed by Stewart.”

Just because Winterbottom, perhaps the most prolific current British director turning out more than a feature a year since 1995, wants to turn the finale into a dance macabre where Coogan must deal with the passing of his father there’s still room for levity.

Winterbottom takes the audience on a journey from the Temple of Apollo at Delphi to the island of Lesvos. While the trip is obviously modeled on the decade long trek of Odysseus maybe the real journey has been the ten-year cycle of these four exceptional films.

“The Trip to Greece” from IFC unwinds starting Friday via Video On Demand from the usual sources.