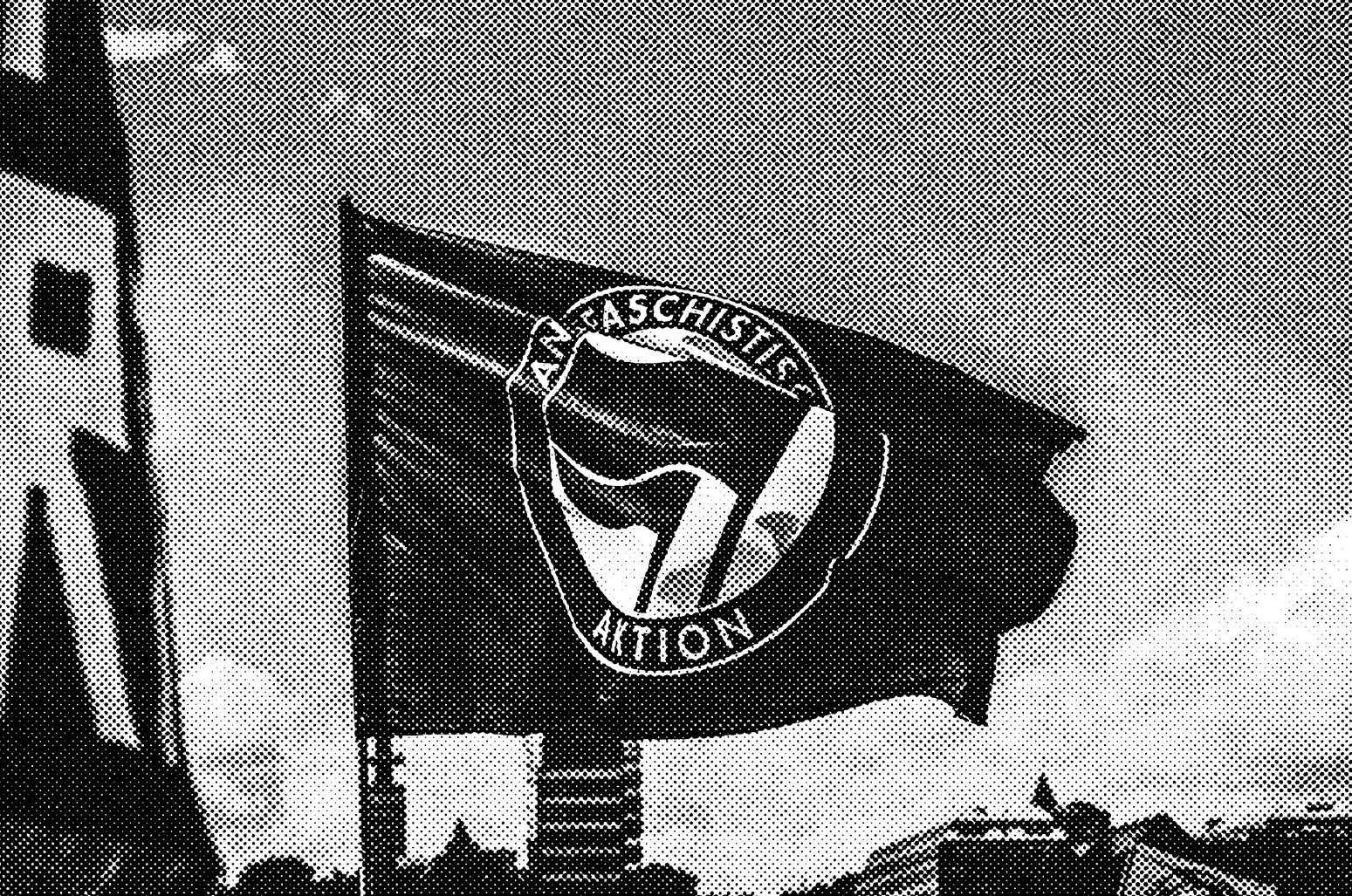 It is wrong for Trump to declare them a terrorist organization. It’s even more wrong for anyone to pin their hopes on them.

Listen habibi. I am an Arab and was born into the highly-complex sectarian environment of the Lebanese Civil War. I cut my teeth on understanding the ever shifting alliances that exist within a society fractured along political, religious, sectarian, and class lines. I learned early that not only does politics make strange bedfellows but wars make enemies friends. In short, you are not easily going to bamboozle a motherfucker when it comes to factionalism. And if you are going to recommend a ‘diversity of tactics’ that includes violence, you can not be a neophyte.

When Antifa says “we are not an organization only a tactic/abbreviation despite having logos, listservs, prospecting processes, insignias, 100 social media channels labeled ‘community organization, complex communications channels, a virtual uniform, and ideological underpinnings, I can smell the horseshit a mile away. Sure, they are disorganized. Sure, they are ineffectual.  Yet feigning ‘non-organization’ and decentralization is a time-honored deception. It removes accountability and recourse and allows members of a group to act nefarious without the greater movement being made culpable.  It is a brilliant tactic, efficient, yet entirely disingenuous. Fascinating enough, someone from Antifa released a memo reiterating their non-organization status. Yes, you read that correctly.

Donald Trump’s erroneous designation of Antifa as a terrorist organization only further confuses the landscape. Surely, he only did that to justify an COINTELPRO type tactics and to frame his fight against protestors as a struggle against angry anarchists. If they were not organized before, they better get to organizing. Nobel laureate and father of modern linguistics Noam Chomsky recently made similar sentiments when he described Antifa as “a welcome gift to the far right and the repressive forces of the state, while also providing some justification for the absurd claim that Antifa is comparable to the far-right forces.”

For discussion sake, what is an organization? Well, despite words meaning little to nothing these days, the Dictionary describes an organization as “an organized body of people with a particular purpose.” So if 80 white boys show up at the same place at the same time wearing the same shit espousing the same anti-capitalist sentiments, then they are an organization. Shit, when they do the good work of feeding people, engaging in mutual aid projects, and serving their communities, they sure seem like an organization. Further, all Antifa are anti-fascist but not all anti-fascist are Antifa. These semantics are important. The group simply is not as large as the abstraction of Americans who qualify themselves as ‘anti-fascist.’

See, modern Americans carry a collective consciousness of just under 300 years. They can not see the world through anything more complex than good guy bad guy, left vs right, Autuobots vs Decepticons. They simply have no point of reference for the highly entangled can of worms that domestic political warfare can bring about. But some of us ( immigrants from countries the U.S. has cultivated wars within)  come here with a comprehensive mental rolodex of political trick-fuckerry that has been honed and sharpened by years of watching your homeland endure the shaky ground of shifting political alliances. It is through this nuanced lens people like myself see the several groups participating in today’s breakdown in American civil society.

Antifa has been waiting for this moment for years. Them along with cops, alt-right militias, and white supremacists have a raging hard-on for what is happening right now. Without it, they have no raison d’etre. Many have portrayed Antifa as the spearhead against modern American fascism. If that is the case, we are more fucked than I imagined. Absurdly enough, there are memes that attempt to make analogous the American soldiers that stormed Normandy with contemporary Antifa. With a descriptor that is an abbreviation for ‘anti-fascism’, many people on the left are expecting Antifa to defeat fascism. That is what effective anti-fascists do. If you are going to enter the arena of violence, you have to be nominally good at it. Antifa is not. But they are good at qualifying the right’s fears by starting fights without doing any discernable damage.

“Punching people in the face or advocating censorship or the abolition of free speech is a very dangerous road to begin to walk down. It’s always the left that pays. We have very dark, sinister, totalitarian forces that are snuffing out the last vestiges of American democracy. And we better revolt, we better respond. But carrying out these kinds of street confrontations, plays right into the hands of these centers of power. ”

Despite its brand, the loose collection of activist groups has no chance of defeating fascism or even giving it a mild headache. Honestly, I am sure there is a church group of 11 year old kids somewhere in Appalachia that could defeat the collective power of Antifa. I am confident these kids could snipe a buck at 200 yards as well. They would fare even worse against your run of the mill biker gang, alt-right militia, or even the Cajun Navy. There is no defanging the empire’s monopoly on violence with Antifa tactics. Street rumbles and window smashing only go so far. In many ways, I am worried for the members of Antifa. If you game out a continued civil violence trajectory that we have seen in the last 13 days, things get dramatically worse for them. As of today, we are at 18+ dead as a result of police repression and the subsequent reactions. Not exactly a slow start. But much like Coronavirus, the numbers have the potential for exponential growth.

If Antifa were to ever become more than a word that ends with a vowel that is scary to conservatives, it needs to move beyond protest scuffles, hacking, and property damage. But any entrance into the arena of violence would fail unless Antifa kids today raised a generation of children who did nothing but study asymmetric warfare. And those kids probably still would not stand a chance against those Appalachian kids we mentioned earlier.

But then again, being ‘anti-fascist’ is simply not enough to get us out of the mess we are in. The problems facing African Americans and other marginalized groups inside and outside this country precede our drift towards fascism. No fascism was necessary for the murders of African-Americans by police during the Obama administration. The militarism that guided the Iraq war which killed 1.5 million Iraqis was democratic in nature.

What we should be focusing on first as an order of operations is racism. Everything else including capitalism is a sideshow until we can excise this cancer on human progress. Systemic racism precedes capitalism by 1400 years. Chattel slavery precedes capitalism by 200 years. Capitalism will fall soon with a stiff wind and we will still need to confront racism. Anyone who asks you to deconstruct capitalism before we address systemic racism is asking you to build a new economic system alongside people that hate you.

Ultimately, expecting anything more than punching a cop or making a mess at Starbucks is a fool’s errand. If they really wanted to become a formidable movement, it would be incalculably better if Antifa spent the last 20 years building massing caches of weapons, preparing for asymmetric warfare, studying insurgency alongside militant Islamic groups, and mustering up enough muscle to play any distinguishable role other than agent provocateur at the expense of African Americans. ( I understand that last sentence was a list of No-No’s. I do ‘advocate’ for any of them. )

Instead, they have spent much of their efforts in the last decade focusing on disallowing speakers, albeit douchebag speakers, from addressing audiences at universities. And they have only been mildly successful at that. Not to mention that even if they were to become a valid source of violence, their overwhelmingly white membership is problematic and could not be trusted to defend a liberation movement of POC. More troubling is the incidence of white nationalists who become Antifa and vice versa as is demonstrated by a current member in this Al Jazeera exposé.

I am sure there are lots of good people who self-identify as Antifa. I am sure some of their hearts are in the right place. But if we get behind a movement that engages in violence, we better think it through and they better be well prepared. We would be better off arming African-Americans to the teeth.