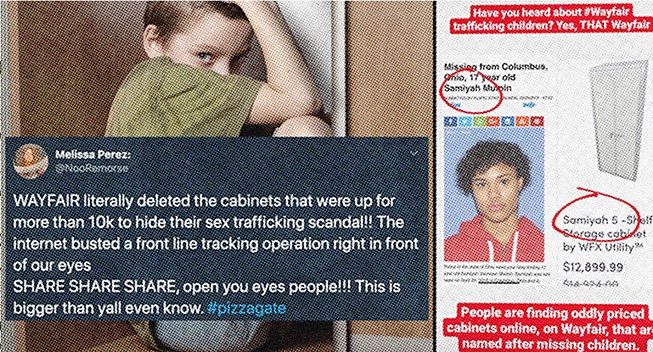 The claims are so bizarre they demand dissection.

In more news about social media reducing human intellect down to that of a ham sandwich, conspiracy theorists worldwide are accusing furniture behemoth Wayfair of trafficking children disguised as cabinets.

There seems to be no substantive underpinning to these accusations other than haphazardly arranged screenshots shared on social platforms.There are no police reports, first person descriptions, financial trails, or credible investigative reporting. The origin of the whole discussion seems to begin with a misunderstanding about the price of some cabinets.

The story begins where all insane stories begin: Reddit. On July 9, the germinal post was made in the  “conspiracy”.  The post declared Wayfair was hocking overpriced utility closets from WFX that were marked to retail at $10,000. There could be online one explanation to the exorbitant price to the furniture item: child trafficking.

The initial thread created the impetus for other speculation as to how the furniture company was engaged in malevolent activities. According to Snopes, “One Twitter user, for instance, found a set of pillows and showers curtains that were listed for $9,999. As similar items on the website were listed for only $99, this person assumed that the only logical explanation was that the higher priced item was being used to traffic children.” But the reality was that someone merely edited the original image to markedly increase the price.

This cornerstone to this conspiracy is the $10,000 price tag on a cabinet.  I would urge anyone disputing the normalcy of this price to spend an afternoon shopping for furniture at somewhere other than Ikea or Target. In a sign of what strange times we live in, Wayfair has spoken to the media to dispel the rumors behind the high priced cabinets. The company has made clear that these are industrial grade cabinets and that their price is par for the course. The furniture retailer then temporarily took the items off of their website in order to generate descriptions as to the elevated cost.

Wayfair told Newsweek in a statement:

“There is, of course, no truth to these claims. The products in question are industrial grade cabinets that are accurately priced. Recognizing that the photos and descriptions provided by the supplier did not adequately explain the high price point, we have temporarily removed the products from site to rename them and to provide a more in-depth description and photos that accurately depict the product to clarify the price point.”

Despite the explanation, the rumors have only grown. True to form, insane people on social media have only grown the amount of absurd claims. One of these claims is that the names of the cabinets correlate with missing children. ( Nobody seems to question t how they are selling multiples on each.) For example, the  “Anabel 5-shelf storage unit ” allegedly is the namesake of  Anabel Wilson who went missing in Kansas. Now, Anabel is not some rare, exotic name and about 800,000 children are reported missing yearly. Nonetheless, the rumors persist. The “Alyvia” shelf is the retail name for purchasing Alyvia Navarro — an autistic child who went missing at the age of 3 in 2013 yet was found dead having sadly drowned in a nearby pond. The fact that so little due diligence is done behind these claims is not only absurd, it is having the effect of dredging up horrors that many of these children’s parents would rather not dwell on.

When engaging a conspiracy theory with this level of absurdity, one must ask its proponents the right questions. Why would Wayfair do this in broad daylight? What are the margins on selling children? Surely it must be more profitable to mark up poorly constructed cabinets than to go to the expense of capturing, housing, feeding, and subsequently selling children. Given the fixed costs of ‘maintaining’ a human, selling a child for 10k seems a little low to generate any real profit margin. Also, how many tens of thousands of people have been coerced into being silent about this? From the web designers to the people who would ostensibly feed the kids to the one that houses them, how does a massive company keep such a secret under wraps?

Yet none of these insane yet necessary questions matter. Those who wish to participate in delusion are willing to ignore simple explanations and avoid critical questions at every turn. Yet these collective delusions are the new baseball in America. Whether it is classic tin-foil hat conspiracies, #Qanon, the many leftist insanities, or whatever —  the new reality is that many of us want to ignore reality. 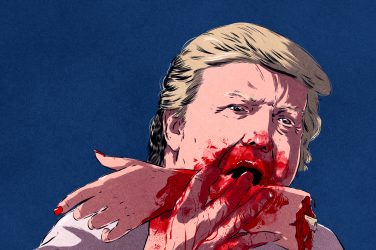 Donald Trump no more invented “Make America Great Again” than he has ever invented ...