What do you know that life-long civil rights activist, philosopher, and academic Angela Davis does not know?

By putting Biden up as the Democratic nominee, the DNC has slapped us all in the face. But another 4 years of Trump would be a shotgun blast to the belly. Which do you prefer: being slapped or shot with the shotgun in the stomach? The lesser of two evils is all we have right now and putting our heads in the sand will not improve the situation.

There is nothing ‘radical’ or ‘revolutionary’ about aiding and abetting Donald Trump. Sitting out this election would be exactly that.

This is one of the finer points I like to imagine a seasoned, wise activist of 5+ decades like Angela Davis could understand. Despite her own personal, ideological principles, Davis has fought enough battles and seen enough victories/losses to know that maintaining a sense of pragmatism is critical. In a recent interview with RT News, Davis made clear that a vote for Biden was a preferable alternative to Trump despite her Marxist-Feminist worldview.

“Biden is far more likely to take mass demands seriously. Far more likely than the current occupant of the White House. So this coming November, the election will ask us not so much to vote for the best candidate, but to vote for or against ourselves.”

Davis also took to the airwaves recently to voice her support for a Biden vote despite not advocating for Biden himself. She told Democracy Now , “To me, that is the only thing that someone like a Joe Biden represents. But we have to persuade people to go out and vote to guarantee that the current occupant of the White House is forever ousted.” Host Amy Goodman described Davis as a “renowned abolitionist, author, activist, professor emerita at the University of California, Santa Cruz, author of many books, including Freedom Is a Constant Struggle: Ferguson, Palestine, and the Foundations of a Movement. ” The list is very short of others who have anywhere near the ‘radical’ credentials Davis has.

Davis should stand as an example to all ‘radicals’ that utilitarian approaches are often necessary and that there is no merit in ideological rigidity. If there was ever a time in American history to become practical and un-idealistic, that time is now. People’s lives literally depend on it.

For 4 decades now, I have been told that every presidential election “is the most important election of our lifetimes.” This is at once true and hyperbolic. The reality is, as the stakes get higher and managing the American Empire becomes more untenable, every election is dramatically more important than the last. This is part and parcel of the blowback of empire on an unwitting electorate.

With Democrats offering up the most lukewarm, centrist, old-guard candidate they could possibly find, more radical elements of the political left are making a moral symmetry between Donald Trump and Joe Biden. Many Bernie Sanders supporters and those further to the ‘left’ have expressed their frustration with the Democratic National Committee by making promises to not vote for Biden. By equating a vote for Biden with a vote for Trump. By claiming that Biden and Trump are analogous — old, white men who want to cling to patriarchy, the deep state, oligarchy or one of the many other ‘fill-in-the-blank groups that do not have regular meetings or standardized membership.’ The par-for-the-course ambivalence and corruption of Biden is nowhere in the vicinity of Trump’s callous ineptitude and potentiality for authoritarianism. 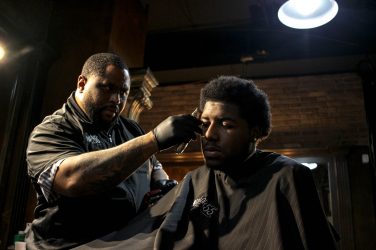