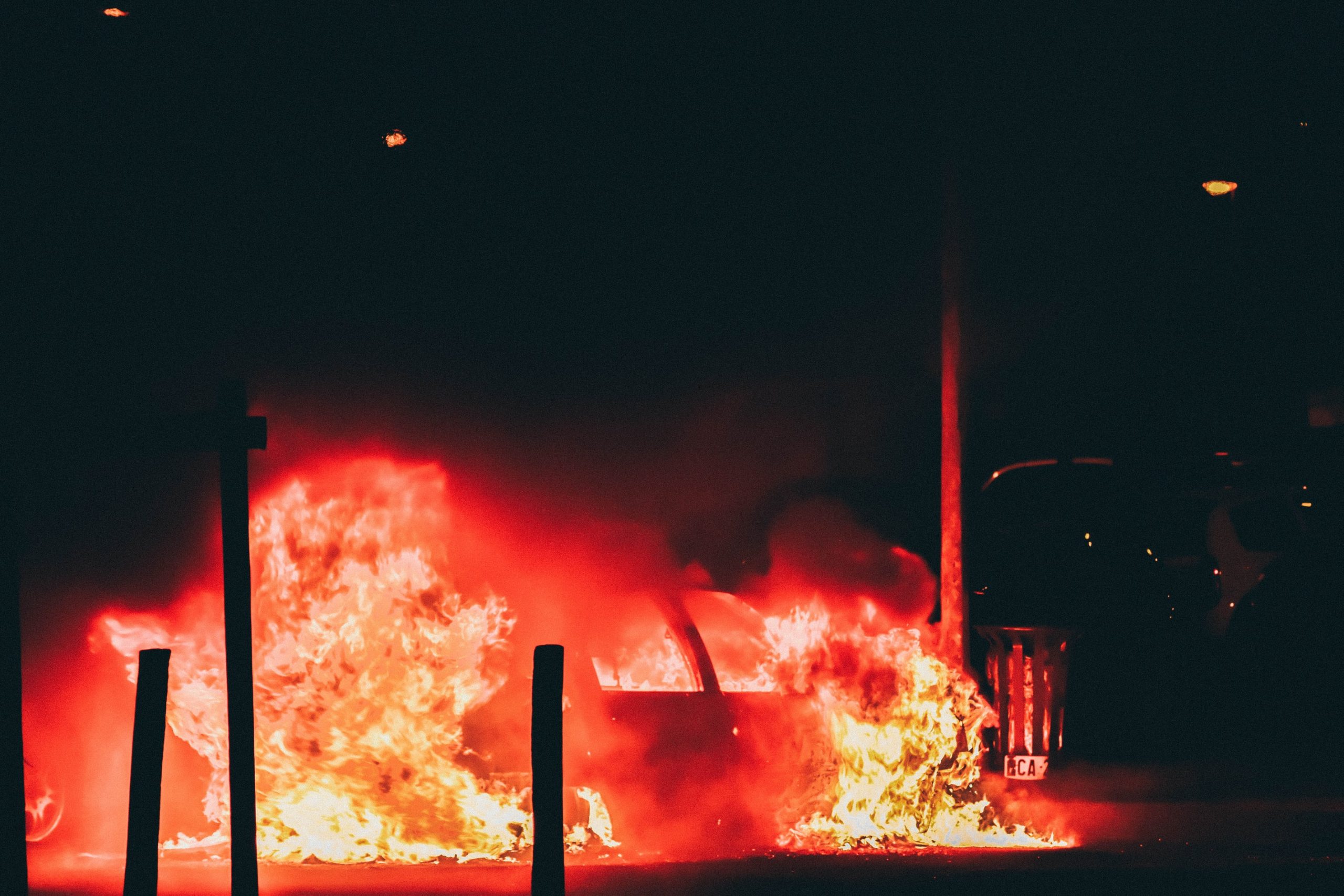 In the absence of dominant firepower on behalf of the resistance, factionalism and political warfare serve to only fuel the size and power of the state and legitimize aggression. Duh.

“Violence is a disease, a disease that corrupts all who use it regardless of the cause.”
― Chris Hedges

We have reached a critical fork in the road. For the first time since the U.S. Civil War, Americans are debating the efficacy of violence against their fellow citizens as a political tool. Not self defense, political violence. From the far right to the far left, people are calling for revolution, boogaloo, or simply to ‘burn it down.’ Radicals of all stripes are suddenly having conversations about how to best deploy violence to achieve their political aims. Social media is littered with historical revisionism narrativizing a connection between violence and social progress. People on both sides of the false dichotomy are getting hurt and dying. Credible media sources are writing naive expositions on how violence can be a useful tool.  Yet far too many are sprinting towards confrontation with no exit strategy or post-fight plan. Americans simply do not have factional warfare in their collective consciousness. It can not be understated how dangerous upending the delicate social balance there is in the U.S. — what makes it far worse is nobody has a plan for the day after they ‘dismantle the system’, Save America’, or attempt to effectuate their political goals through violence against their compatriots. It is time we revisit the futile endeavor of domestic warfare against fellow Americans.

Violence is a ritual reaffirmation of the dominant system.

Violence gives the state license to brutalize its own citizens on a massive scale. A temporary surge in social unrest or attempts to substitute the prevailing order and hierarchies give power structures raison d’etre. That is, unless the opposition has overwhelming firepower. Which it does not. So we won’t waste our time with that. Violence, if overwhelming and coordinated, can be a useful political tool but that is not a reality for any domestic group. The mechanisms of U.S. state violence have been battling generations of battle hardened mujahideen on their own turf. They can definitely whoop the Proud Boys, Antifa, or any other homegrown group with ease. Instantly. Let go of the fantasy.

The Expansion of the Police and Surveillance State Needs Violence.

The only prerequisite for a government is the monopoly on violence. According to Max Weber, 18th century sociologist and political economist, the state is that “human community that (successfully) claims the monopoly of the legitimate use of violence within a given territory.” Dramatic upticks violence gives the state regular opportunities to reassert itself. The more pushback, the more violence. Politically unaligned citizens then acquiesce rights and power further to the state in the hope of security. Obviously, September 11th and the subsequent Patriot Act represent precisely this kind of process. Remember, wiretaps before the 9/11 attacks required warrants. Also, U.S. citizens were not extrajudicially killed. Though the attackers were not domestic, 911 serves as the perfect archetype of a deconstruction of the rights of citizenry in the name of security. Yet this is nothing new. The justification for much of European colonialism and imperialism was that imposing states provided ‘stability, security, and legal order for their subjects.’ Often times the existence of violence was fabricated — ( See Reichstag, Gulf of Tonkin, babies in incubators in Kuwait, etc. )

Violence is a Gift to Trump

Donald Trump seizes on any opportunity to fan the flames of division and sectarianism. We all know, in the first presidential debate, he went as far as to basically give a shout out to the Proud Boys. But what was not discussed is the relative insignificance of the douchey group of failed frat-bros. In under a minute, Trump took a group of, at last count, barely 160 nationwide members and put them on the proverbial pedestal. Overnight, they became a household name. The distinction between The Proud Boys (PB) and the KKK, Aryan Nation, and other right wing groups is PB’s penchant for highly visible street brawls. 2 weeks ago in Portland, PB put out a nationwide call for a march which they publicized for weeks. They could barely muster a few hundred dude-bros. Yet what they did cultivate was an enormous amount of counter-demonstration in the form of the typical PNW Ancom/Antifa types. Then came the street brawls and further violence. The left took the bait and gifted terabytes of video footage to the right wing pundits — they have since been airing it all over social media scaring the heebeegeebees out of white women. With this perceived threat, he has been able to violate Posse Comitatus and deploy federal troops to Portland. He has now designated Portland, Seattle, and NYC as ‘Anarchist Cities.’ As the violence expands, we are sure to see a ‘rinse and repeat.’

Riots often have the effect of making the U.S. more conservative

One crucial consideration should be how the street violence is perceived by the overwhelming majority of Americans who have not entered the fray; not including your average 30/40 something ‘revolutionary’ who stayed home to let the young people get hurt in their stead. The fact is that most Americans can not tell you why the violence in the streets is happening much less the difference between Marx and Adam Smith ( Neither could most Marxists or Capitalists either. ). What they can tell you is that factional warfare is fucking up their weekend barbecue and they want it to stop. This has a tendency to move the country to the right and seek ‘law and order’ type leaders. Ahem. A 2015 Princent study directed by Omar Wasow went as far as to assert that U.S. history demonstrates a predictable move towards conservatism with the advent of rioting. According to the study, the 1960s saw a pair of  simultaneous waves of protest in the form of the nonviolent civil-rights movement and urban rioting. The Princeton study contends that Richard Nixon rose to power on the back of social backlash to the riots; not the nonviolent protests. In fact, candidates who were closely aligned with non-violent protests performed well. Wasow asserts that “proximity to black-led nonviolent protests increased white Democratic vote-share whereas proximity to black-led violent protests caused substantively important declines.”

Determining causation is obviously a murly task yet Wasow uses a method to compare the public’s concern for civil rights and its concern for “social control,” with both peaceful and nonviolent protests. The symmetry is astonishing:

‘False equivalence’ in ideology, but not tactics

We took a little heat, albeit poorly aimed, for the last article on this subject titled: ‘Let the Truth Ring: Antifa & Proud Boys Are on the Same Team‘. Many commenters made claims that it made a false equivalency between the ideologies of Antifa and the Proud Boys. Both ‘groups’ have poorly formed, non-contiguous belief systems. Yet the commonality is the tactics, not ideology. Sure, I dig some of Antifa’s worldview over the abashedly bigoted and chaivinist Proud Boy ideology yet it does not make a lick of difference as it manifests itself on the streets. The proof is in the pudding. When innocent bystanders are intimidated, brutalized, or killed by a political group, it comes as no comfort that their ideology was ‘sufficiently pure.’ Importantly, history demonstrates that sometimes having ‘proper’ ideology and a perceived moral high ground can justify anything. History books are bedazzled with millions of stories of ‘the good guys’ engaging in horrific atrocities.

You are going to lose.

Lastly, and most importantly, is a utilitarian understanding as to whether anything of substance is to be gained. In order for violence to be an effective political tool, the violence itself must be effective. Simply said, if you are going to take a shot at the King, you better not miss.