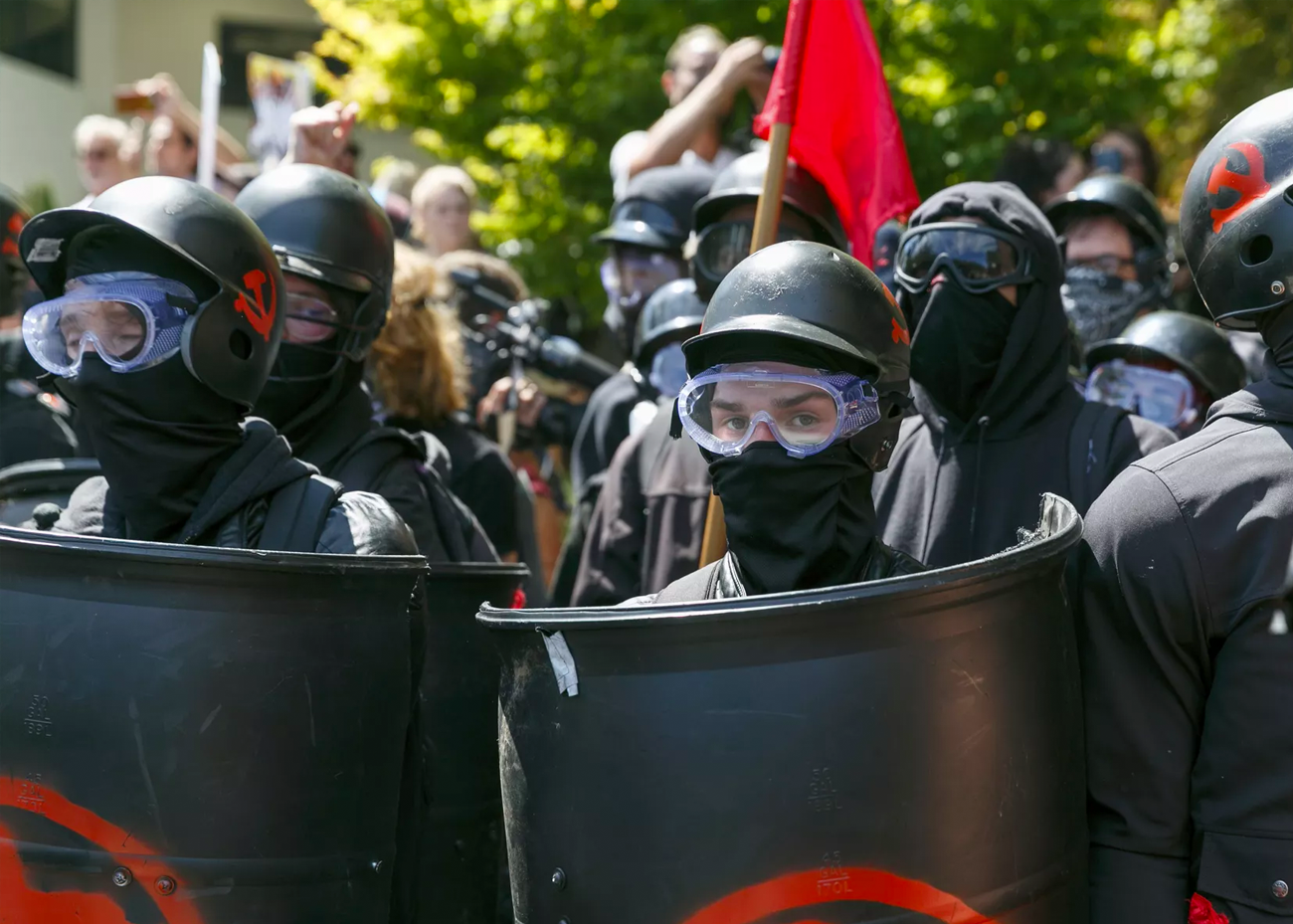 Antifa is not an ‘organization’ but an umbrella term for varying organizations that refer to themselves as ‘organizations.’ It is also a movement, a tactic, and a rad merch shop. Confused?

The notion that Antifa is only an amorphous idea is one that has been intermittently supported in the American news media. With the growing tumult in American cities, allegedly fueled by black block anarchist groups, the country is forced to grapple with the Antifa concept. It is well important to get it right. Though Antifa is not a single organization but rather an umbrella term for far-left-leaning militant groups, they feature some of the tell-tale characteristics of an organization: iconography, a set of precepts, communications, and most importantly, a dress code. Like many popular movements, the body-whole of Antifa does good work while simultaneously engaging in political violence and intimidation. They, like all others who deploy political violence, believe their cause and that they have the moral high ground.

Trump has taken to lambasting the movement — asserting that Antifa is an organized group that is responsible much of the current unrest in American cities such as Portland. During the first presidential debates, the Antifa conversation has bubbled back to the surface.

During the debates, Biden made the statement that “Antifa is an idea, not an organization, that’s what [Trump’s] FBI director said.” However, there are elements to the case of Antifa being solely a ‘movement’ that fail to add up for many across the country.

The commonly touted argument is that Antifa is a movement opposing fascism which draws lineage from the anti-fascist groups of Spain in the ‘20s and ‘30s. The often parroted slogan of “Antifa is an idea” has been, for all intents and purposes, confirmed by statements from FBI Director Chris Wray. This snippet has been repeatedly quoted by defenders of Antifa yet never includes Wray’s subsequent elaboration:

“I want to be clear that by describing it as an ideology or movement, I by no means mean to minimize the seriousness of the violence and criminality that is going on across the country. Some of which is attributable to that people inspired by, or who self-identify with that ideology and movement. We’re focused on that violence on that criminality. And some of it is extremely serious.”

However, even while entertaining the notion that political ideology cannot morph into a distinct entity, there are many self styled and branded Antifa ‘cells’ across the nation — with some even offering their own branded merch for sale. ( Anti-Capitalism is a hot commodity. ) These independent cells coordinate and organize, often joining up with other groups and movements such as Black Lives Matter, and engaging in protests and civil disobedience. While not operating as a unified organization and lacking a definite headquarters or organizational leader, the loose network shows the capability to operate cooperatively with other ‘cells.’

According to Robin Young and Serena McMahon at WBUR: “Antifa has no leader and no clear organization. However, there are organized, localized groups who have followings on social media, such as the Rose City Antifa in Portland, Oregon.” To be clear, almost all localized Antifa pages on social media self-describe as ‘organizations.’ It is obvious why everyone is so confused.

The most damning part of engaging in the “Antifa argument” is that there is a catch twenty-two. Antifa takes on the mantle of fighting for injustice and campaigning against social and political evils. They claim to own the mantle of anti-fascism and anti-racism. So if you have a disagreement with any ‘Antifa’ type people or ideas, you MUST be a fascist and a racist. Who in their right mind would be against such a group? And to even take a stance against it can be used against you.

However, the movement has come to be associated with rioting, violence, and destruction across the country in recent months. With the boiling over of racial tensions in the wake of George Floyd, Breonna, Taylor, Elijah McClain, and countless others— and many activists likely being out of work during a pandemic— there is nothing but time to take to the streets and engage in endless demonstrations. Some substantive, some fatuous. With the substantial political divide stoked by the media, each side is safely encased in their own reality, unable to be moved to the other side.

This makes having a real discussion on Antifa more difficult. At best, Antifa is a loose organizational web of groups opposed to fascism, and at worst, a violent mob hell-bent on the destruction of the Western system.

In common vernacular, “Antifa” has come to be a far too broad descriptor for the ‘hordes’ raging in the streets of Seattle and Portland. To many others, fueled by opposition to the president, Antifa is a well-meaning if even moralist movement campaigning for change and the betterment of humanity. Like just about everything else in cartoon-like narratives within 2020 U.S. politics, the truth is a million miles away from the false dichotomy of these two narratives.

Movement or not, the public zeitgeist will make the final decision; it just takes a bit of time.