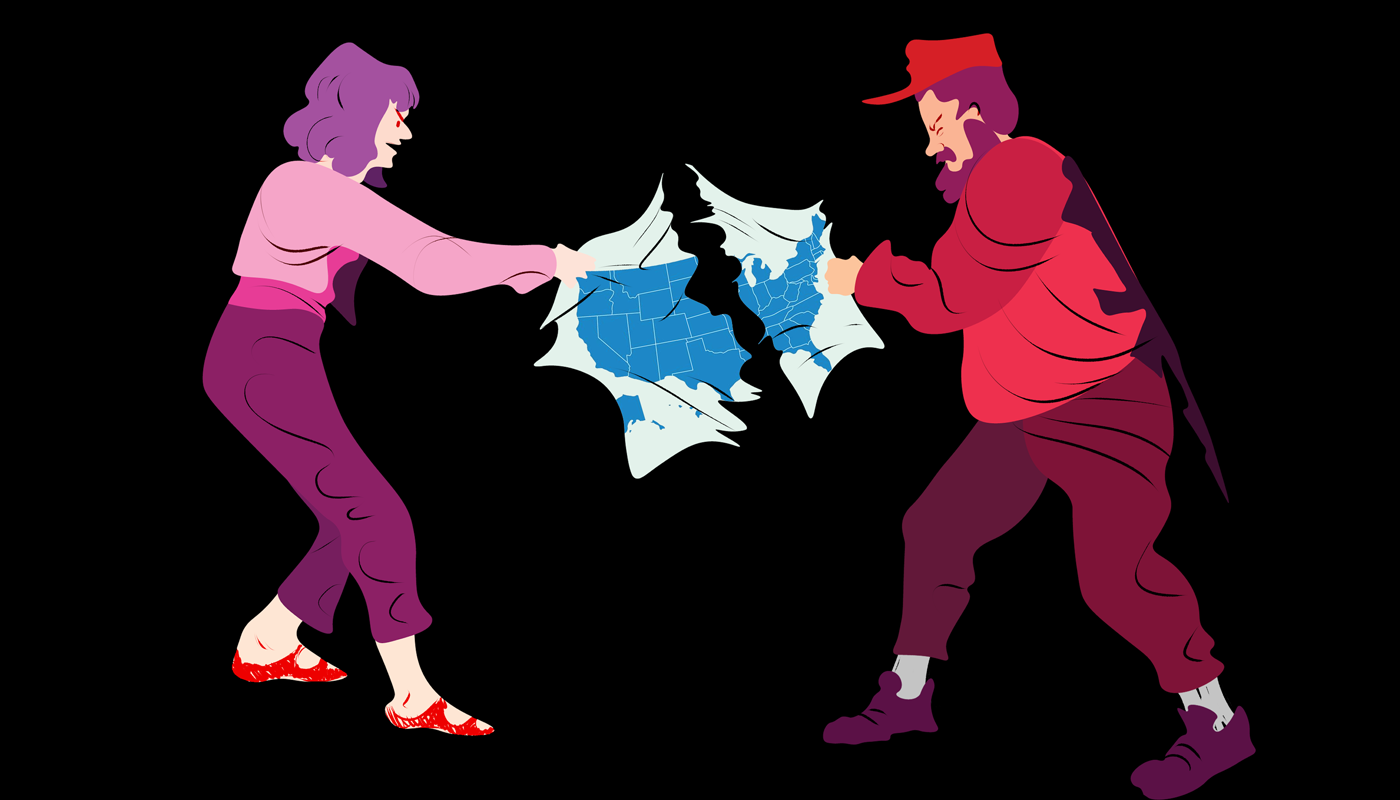 Political extremists, bigots, rigid ideologues, reactionaries, hyperbolic posers, performative activists, and edgelords have all come together to gaslight Americans into believing nuance and rationalism are analogous to weakness. The good news is they represent a small portion of our citizenry. The bad news is they are really loud, are controlling the narrative(s), and are dragging the rest of us into their fight.

Like so much language within our political discourse, ‘Centrism’ does not mean what it used to mean. Centrism previously denoted an understanding of the complexity of political issues and a willingness to get down into the weeds of nuance. What was once a measured ideological approach rooted in pragmatism, compromise, and tolerance is now the political equivalent of a wet noodle. Centrists are characterized by many on the ‘left’ as impotent boot-lickers who cower in the center. Much of the political ‘right’ sees centrism as far too compromising with the radical forces of the left — a slippery slope into some Marxist-Dystopian nightmare. This all has had the effect of drawing an otherwise even handed electorate into the fringe out of a perceived moral-necessity. For the first time in American history, the center is a lonely place to be.

The easiest part of getting back to a collaborative political process is unseating Donald Trump; half the reason we are in this mess. Yet the political divide became ugly before his ascension. When he is gone, we will pick up where we left off and will need to address. Let’s explore some of the motivations, contradictions, and reasoning for the abandonment of the ‘middle path.’

Let’s start by not labeling reasonable ideas as ‘radical‘

Ending brutal and racist practices by U.S. law enforcement should not be a ‘radical’ policy or associated with the ‘political left.’ Only in the absurdity of 2020 does one need to realign their politics to be on the right side of this issue. Demanding stateside corporations pay a modest tax rate into the economies where they derive their income is not an extremist position either. Women having bodily autonomy should not be considered radical. Sustainable environmental practices are not crazy talk; they are common sense. A social safety net and universal healthcare are not fringe ideas. Conversely, a healthy distrust of expansive government that the ‘political right’ has historically championed should equally not be an extremist view and entirely congruent being against the aforementioned brutal and racist practices by police. We have been bamboozled into believing that taking a side on the issue of police brutality against Black Americans is a ‘political’ position. Unfortunately, far too much of our political discourse which was once ‘center of the road’ are now suddenly on the fringes. Yet the topsy turvy America of 2020 is full of contradictions, rigid ideology, and blatant hypocrisy.

Most Americans Used to Be Centrists. Elections and debates had consequences and parties did not try to win by growing/diminishing voter rolls.

One of the more interesting political developments in the last 5+ years has been the vilification of ‘centrists’ and the subsequent reduction in Americans who see themselves as such. In 2013, an NBC News Poll concluded that 55% of Americans self-identified as centrists or moderates. Those numbers are diminishing though. A 2019 New Center Policy Institute  found that just 43% of respondents described themselves as centrists. Nonetheless, 87% of Americans feel that political polarization is a threat to the country, according to a University of Chicago study.

The uncertainty of the modern condition has moved otherwise reasonable people into calcified ideology. According to a recent Pew Research poll, The overall share of Americans who express consistently conservative or consistently liberal opinions has doubled over the past two decades from 10% to 21%. “Ideological silos” are suddenly commonplace on both the far left and far right. Rigid ideological adherents on both sides of the aisle are more likely than others to say that most of their close friends share their political views. The report added “Liberals and conservatives disagree over where they want to live, the kind of people they want to live around and even whom they would welcome into their families.” The rise of ideological uniformity has been much more pronounced among those who are the most politically active —  38% of self described ‘politically engaged’ Democrats fall consistently into the fringes of their party ideology. into, up from just 8% in 1994. The change among Republicans since then appears less dramatic – 33% express consistently conservative views, up from 23% in the midst of the 1994 “Republican Revolution.” But a decade ago, just 10% of politically engaged Republicans had across-the-board conservative attitudes.

People seek safety in groups in times in times of uncertainty. In order to join a ‘tribe’, you have to accept the entirety of its worldview. We obviously live in precarious times. This year alone has seen pandemic, social unrest, and massive economic fallout. Our country was already on a trajectory towards economic regression and losing our position as the planet’s power broker. When people are afraid, they seek the solace of group affiliation. Unfortunately, moderation or centrism has never been associated with tribal thinking. Reasonable people have never used iconography, rigid theory, or dress code the same way the far right and left are so well known for. Nobody, yet, has formed an affinity group with fellow moderates and centrists to arm themselves to the teeth or study guerilla warfare.

“Like all men who are fundamentally of the group, of the herd, he was incapable of taking a strong stand with the inevitable loneliness that it implied.”

But why are we so driven to find group affiliation? Why do trying times push us to sacrifice our personal ideals in exchange for collectivism?

A 2013 psychological study in the Journal of Social Issues postulates that group identification placates our fear about the future.  ‘Uncertainty-identity theory’ postulates that we are moved to to reduce “uncertainty, specifically feelings of uncertainty about their life, their future, and uncertainty about their self and identity.” Group identification serves as a quick fix to these aforementioned problems. According to the study, “Individuals use the groups that they are part of to define their self-concept. When self-uncertainty becomes chronic, pervasive, or acute, people are strongly attracted to extremist groups, because they prescribe a clear prototype for how one should behave, think, and feel in all situations, and how to behave toward out-group members.” This need for group identity has ushered in an age where Hispanic men join The Proud Boys and kids on Instagram glorify Maoism. It is pretty safe to assume Mao would not have allowed free expression on socials — #repression #starvation. Simply said, we are getting more stupider.

Reliance on Metanarrative is making idiots of us all.

Good versus evil is a warm blanket. Metanarratives allow us to simplify a complex, chaotic world and feel safe in the same way conspiracy theories do. They also allow us to feel morally superior. The common thread between the far left and the far right in 2020 America is the blind obedience to competing yet inextricably tied metanarratives. In the eyes of either, their adversaries are nothing less than the enemy. Their adversary seeks their total annihilation.  There are no differences of opinion; there is only an absolute line of demarcation of good and evil. Autobots vs Decepticons. HeMan vs Skeletor. Tom and Jerry. The far left and far right have both found mechanisms in which to demonize those in their own camps because of the slightest of ideological difference. On the right, those Republican traditionalists who are not willing to go full bore Trumpism are denounced as part of the ‘establishment’ or ‘deep state.’ One the left, those who hold to classical ‘liberal’ values are derided as, appropriately enough, ‘liberals.’ There is nothing more repulsive, more treasonous, or more anathem to a leftist than a ‘liberal.’ The funny thing is that ‘liberal’ remains an epithet on the right for the left. Yet ‘Classic Liberalism’ is where the political center of the U.S. has and should reside. For those of you who slept through 9th grade social studies, Liberalism advocates for civil liberties under the rule of law with an emphasis on economic freedom. It believes in both private property and the state’s ability to *sometimes* take that private property for the common good of society. Liberalism is in its essence a pragmatic compromise. Nonetheless, the rigid and intractable positions of the far right and far left of 2020 demand strict lines in the sand.

The problem with these strict lines of demarcation is the pressure it puts on reasonable, nuanced people to accept a party’s ideology in its absolute entirety. If you are a ‘conservative,’ despite having a worldview with small government, low taxes, and a robust military — you are anathema to many if you are not pro-life enough.

Despite these ideological prerequisites, one has to ask themselves if these are only surface level representations. Extremists on both sides of the aisle have drifted further from their dogmatics roots. The far right, once avowedly ‘fiscally conservative’, have made a blood oath to a statist leader who has dramatically increased the national debt while employing interventionist tactics such as tariffs. This country has not had significant deployment of tariffs since Jimmy Carter. Whereas the left once were the torchbearers of social liberalism they now seek the state to enforce moral standards. Our far right ‘conservative’ president raw-dawgs porn stars while the left has a sex panic. WTF happened here?!

Maybe ‘centrism’ should be rebranded as cold-hard ‘cynicism.’ Cynicism of the religious tendencies of those who have calcified their political narratives. It should be about doing your homework, about getting down in the weeds, and about realizing the complexities of the world often defy the metanarratives we seek. Perhaps centrists should self-characterize as people who have inoculated themselves against group-think and intractable ideology. Oftentimes, there are glaring contradictions within objective truth. Finer details. Compromise. Yes, we need a comprehensive gutting of the law enforcement, eradication of the for-profit prison system, and criminal justice systems. No, all cops are not ‘bastards.’ Yes, the constitution enshrines your right to own a gun. No, you should not fight common sense gun laws tooth and nail despite volumes of legal precedent. Yes, the taxation code in the U.S. is utterly broken, billionaires continue to absurdly consolidate their wealth, and inequality is widespread. No, we don’t need to bring back guillotines and behead landlords. Yes, Marijuana should be legal. No, I can’t front you an ounce. Nuance, please.

Hopefully, folks like Andrew Yang are a harbinger of technocratic/pragmatic centrists to come. In the meanwhile, Job #1 is to get that shit-goblin Trump out of office and escape this cycle of pendulum swings with American political discourse. Tyrants have a tendency to cultivate the most extreme sides of the populace. The good news is, many extremists on all sides will be upset if Biden wins this election.

Viva La Centrism, or whatever.