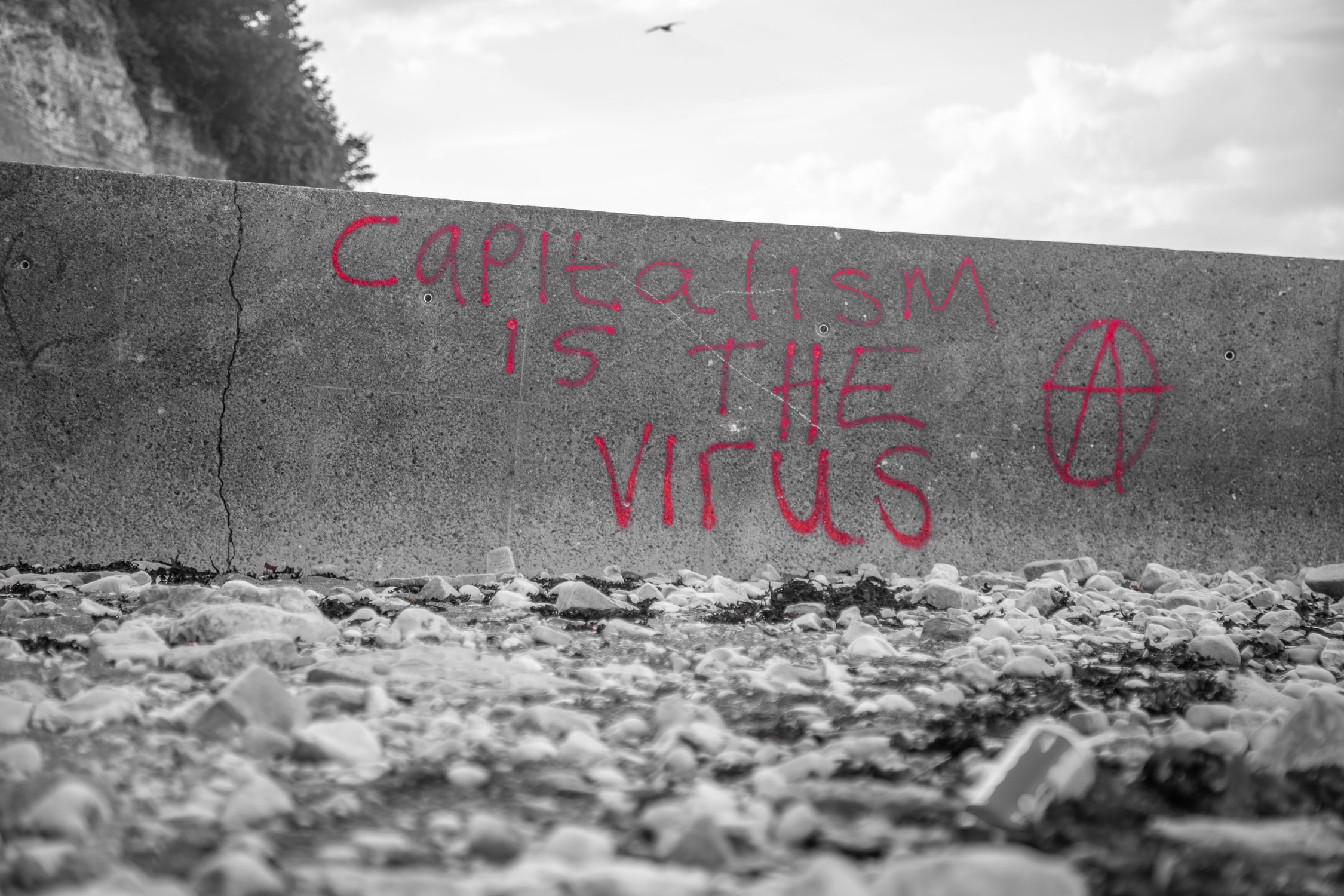 ‘Anti-capitalism’ is on the tip of so many tongues yet so many get it twisted.

This is no defense of capitalism.

Capitalism, like all ‘isms’ other than ‘pragmatism’, can be played out to extremes and cause incalculable human suffering. The extremes of the unfettered capitalism of Pax Americana has resulted in vast inequality, environmental devastation, and  a ‘profits over people’ religion of sorts among U.S. industrialists. As a 2019 United Nations study put it: “America’s immense wealth and expertise stand in shocking contrast with the conditions in which vast numbers of its citizens live. About 40 million live in poverty, 18.5 million in extreme poverty, and 5.3 million live in Third World conditions of absolute poverty.” However, the excesses of capitalism come with a silver lining: In the last 20 years capitalism has lifted more than a billion people worldwide out of poverty, while the volume of people in ‘developing’ countries living on less than $1.25 a day has been cut in half. So there is no simple metanarrative to cling to for either the detractors or proponents of capitalism. True to its Calvinist roots, 2020 Americans need to see everything through the lens of good and evil no matter their political persuasion or faith/lack thereof. However, this reductive desire to paint our economic system in purely binary terms has cultivated some serious logical fallacies. A diabolical mythos has been built around capitalism that ignores historical realities. Let’s dial into a few of the popular conversations and concerns around capitalism and add some nuance to what is a convoluted nation discourse.

If you ask a modern day Marxist about the failures and atrocities perpetrated by the Soviet Union or Maoist China, one will often get the same response: “ That wasn’t real Marxism.” Comically enough, the same strange logic applies much more evenly to capitalist critiques. The U.S. has a corporate socialism model, Capitalism would have let the big banks and auto manufacturers go bust in 2008. – Trump’s use of trade tariffs is patently ‘anti- capitalist and such measures have not been deployed to this extent since Jimmy Carter. If alive today, both Adam Smith and Milton Friedman would not recognize the U.S.’ current economic system as ‘capitalism.’ Bail-outs, subsidies, tariffs, and trade wars are all inherently anti-capitalist. ‘Too big to fail’ is the antithesis to the free market values they espoused. Not to say Smith and Friednman were ‘good guys.’ Far from it.

Regurgitated on social media accounts and out of the mouths of college sophomores nationwide is the canard that ‘racism and capitalism’ can not be decoupled. This ahistorical belief presumes that early capitalists conjured up racial theory to justify the inevitable human exploitation that nascent capitalism would create. If certain peoples could be dehumanized then their labor could be exploited. The only problem is this is entirely incongruent with the historical chronology of events. Chattel slavery preceded capitalism by a few hundred years as did European racial theory. Racism, and particularly anti-Blackness, have existed in every economic system whether monarchist, communist, or theocratic. Conversely, capitalism has had no problem exploiting the labor within homogenic societies. This crucial importance of understanding that capitalism and racism can indeed be decoupled handcuffed to the eventuality of modern ‘capitalism’s’ self-imposed collapse. Deconstruct racism first and you can build an economic system alongside people who see you as a human being. Topple capitalism without curing the scourge of racism and you are forced to build a path forward alongside those who hate and dehumanize you.

If you distrust the government, ‘true’ socialism is not for you.

There is a growing contradiction within the political attitudes of Gen Z. According to recent Pew and VOC polling, Americans between the ages of 16 and 23 – 30% view “Marxism” as worthy of support. The term’s favorability has skyrocketed from only 6% in 2019. Here is the glaring contradiction: Americans increasingly distrust the government to take care of their interests, with 87% saying they trust themselves over the government and their community (a 7% increase from 2019). This is especially the case in younger generations, with only 6% of Gen Z and 5% of Millennials trusting the government to take care of their interests, down 8% and 11% from 2019, respectively. There is a deep operative problem when we distrust the government yet want to charge it with the responsibility of providing all of our needs — equally. Maybe many do not realize what ‘true’ socialism, using its literal political definition, would look like? Many imagine some future U.S,. socialism of the future as modern day America PLUS a shit ton of social services. Well, that is not socialism. In true socialism, the state controls the means of production, private property is prohibited, intellectual property is prohibited, and  equity is enforced by coercion. Also, no need in referencing Scandinavian countries as ‘socialist.’ Though they have ample social programs financed by their vast energy wealth, they maintain a free market system, private property, and have the luxury of less than 10 million people to provide for; respectively. No minimum wage, reasonable top level taxation, and softly regulated  markets are a few of the contradictions of ‘Scandinavian Socialism.’ Heck, Denmark’s former Prime Minister recently came out publicly to remind the world that they are NOT a socialist enterprise. What people actually mean when they say they seek ‘Scandinavian Socialism’ is that they actually just want better capitalism. Not the unfettered capitalism-corporate socialist monstrosity that the U.S. has today.

Even ‘anti-capitalism’ is a hot commodity

Anti-capitalism is big business. Resentment towards an exploitative economic system has transmogrified into a brand aesthetic. People sell anti-capitalism candles on Etsy. Your choice of anti-capitalist t-shirts for sale are endless. Social media is littered with tens of thousands of reductive memes blaming capitalism for all the ills of society. Even mental health issues are attributed to our jumbled, often incoherent economic system. It’s all a bit much. Yet the ultimate comedy in all of this a robust, free market economy can bring about the economic prosperity that powers vast social programs. That is a good thing. What is no-bueno is when we go full ‘ism’ and seek textbook socialism. That is the critical communications error Bernie Sanders campaign made this last go-round. Instead of advocating on behalf of marginalized communities a comprehensive social safety net, he scared the heebeegeebees out of a third of the population by conjuring up a litany of 20th century atrocities by self-describing as a ‘socialist.’ He referenced Sacndinavians who refer to themselves as Social Democrats, whereas he advocated for Democratic Socialism. Fundamental difference there is the ‘ism.’ The ‘ism’ is what turns the process into a rigid ideological endeavor instead of a utilitarian effort to provide social services to those who can not otherwise provide for themselves. Even the language of ‘Democratic Socialist’ is problematic. Implicit in the necessity for a precursor word, ‘Democratic’, is the admission that ‘Socialism’ has ugly connotations. No need for a softening, qualifier if the core noun has no history of atrocities. Equally absurd is George W. Bush’s notion of ‘compassionate conservatism.’ The implication is that ‘conservatism’ is often not compassionate– which is, well, true. Why regurgitate their PR mistake?

Get a new job before quitting your current job

My dad used to tell me to never quit my job until I have secured a new job. The same goes for your complex, economic system. The interim period between collapse and renewal will be excruciating and involve untold human suffering. With so many people calling for revolution, civil war, reset, boogaloo, or to ‘burn it down’, one has to wonder what their plans are on day one after the current civil system comes crumbling down. Do you have immediate plans to guarantee people their pensions? Do you have a plan to address the pandemic on day one ? Anybody on your team understand water sanitation? The platitudes and slogans become useless once you actually have to govern and engage the ‘boring shit.’ If your solution to the aforementioned problems is for our treasury to print more money, then you are going down the treacherous rabbit hole so many nations have gone down before.

What happens when the bills can not be paid for social programs? Bankrupt governments the globe over experience utterly predictable results. Google ‘Venezuela.’ Unsustainable socialism leads to corporate and/or authoritarian government takeover. Social programs need to be measured and temporary. There is no silver bullet. There is no utopia. No government in human history has reliably fed its people.

Only your mother loves you. The state will never replace her.