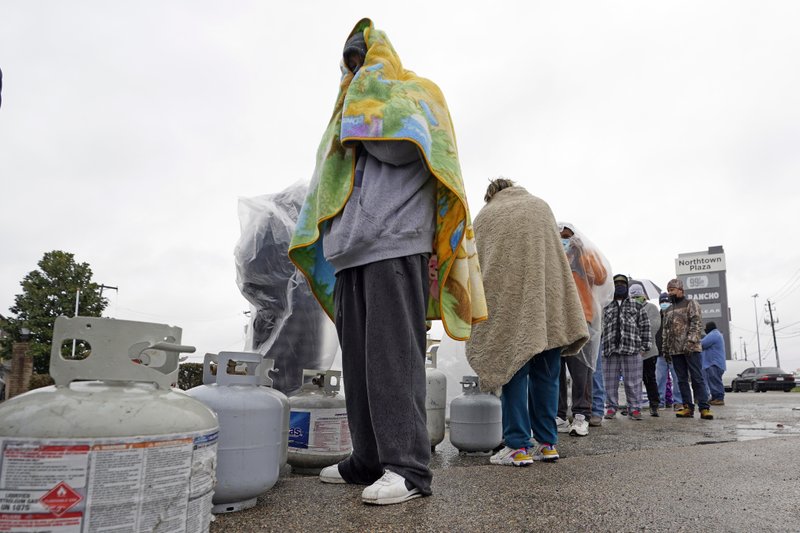 Virtually no one who has been branded a “socialist” any time in the last hundred years has expressed even the slightest interest in government ownership of the means of production (the classic definition of socialism). But it makes no difference; the epithet and the indictment remains.

There will be plenty of blame to go around for the epic failures revealed by Winter Storm Uri. There might even be accountability for those whose inaction, incompetence, or malicious agenda contributed to those failures. But it is for those suffered to either levy blame or seek accountability– or, in the case of those who suffered most… their surviving family and friends.

But it is not out of bounds for any of us to draw lessons and observations from the flaws revealed by this epic stress test of the shared infrastructure of the entire United States of America– starting with what should be, but frequently is not, an obvious truism: It is indeed the shared infrastructure of the United States of America.

When the country has fallen short, it has been because that vision of commonality and common good has also fallen short. One of the most pernicious and persistent of these failings has been the recurring notion that providing for this common good is somehow “socialism” — and that, somehow, socialism — as it is broadly defined in this country — is an inherently bad thing.

What makes this particularly pernicious is that virtually no one who has been branded a “socialist” any time in the last hundred years has expressed even the slightest interest in government ownership of the means of production (the classic definition of socialism). But it makes no difference; the epithet and the indictment remains.

What remains as well is that those most inclined to use that epithet are very often the very first to seek their own benefit from the common good. Case in point: The current request for federal aid from the state of Texas in order to recover from widespread winter storm damage — damage that has indisputably been made worse by the failures of Texas’ independent power grid under the mismanagement of the laughably misnamed Electrical Reliability Council of Texas.

Of course, Joe Biden has approved the request, making good his promise to be a president for all Americans and underscoring that real presidents do not use disasters as an opportunity to make points against political opponents or demonstrate their own ethnic biases. Real presidents lead the executive branch of the United States Federal government — and administer that government on behalf of the common good.

It is to be hoped that there are lessons to be learned here for all of us, starting with the fundamental folly and foolishness of trying to have it both ways. Elected state officials in Texas might begin to demonstrate their gratitude for Federal assistance by quietly dropping frivolous bills promoting the notion of Texas seceding from the union — permanently. From there, they might proceed to re-examining the wisdom of having an independent state electrical power grid that came very close to complete failure.

But the lessons go beyond Texas. Almost every major city in the United States suffered to some degree from Winter Storm Uri, including power failures, water service failures, and internet service failures. In many cases, these failures could be directly attributed to permitting public utilities to be operated as private enterprises under insufficient regulatory oversight.

There is far more extreme weather in store. It would be monumentally foolish to treat Uri as a “one off” event. The chance to change the course of global climate change has essentially passed. All that remains is the possibility of mitigating it, mitigating the impact on our civilization.

The United States needs to have a single, unified, smart electrical grid that operates at maximum efficiency for all of us. Optimally, both electrical service and internet connectivity should simply be nationalized — but, of course, that would be socialism. And socialism is bad… mkay?

Except when it isn’t.

In 1933, Federal legislation created the Tennessee Valley Authority, which brought electric power for the first time to millions of households across Tennessee and other parts of Appalachia. A previous failed one-term Republican president had vetoed much of the core legislation as “socialist” — but after he was replaced by a Democratic President who understood the concept of “common good”… it happened anyway.

Nor is exercise of the common good entirely limited to the Democratic Party (let’s be honest: Almost entirely). Under the guidance of Republican President Dwight D. Eisenhower, the Federal Aid Highway Act of 1956 was signed — resulting in what we now take for granted as the Interstate Highway System. Of course, Eisenhower was unafraid of large public works projects and very clear on the concepts of both “socialism” and “facism”, having allied with proponents of the former to defeat the latter as Supreme Commander of Operation Overlord (in other words, the most “antifa” motherfucker ever).

It is to be hoped that Joe Biden follows the shared examples of leaders like FDR and Eisenhower. But no such example or leadership can prevail unless all of us are prepared to accept our common responsibility for and to each other. If that common responsibility is, indeed, “socialism”… then that should be a word we are all very proud to accept and use.