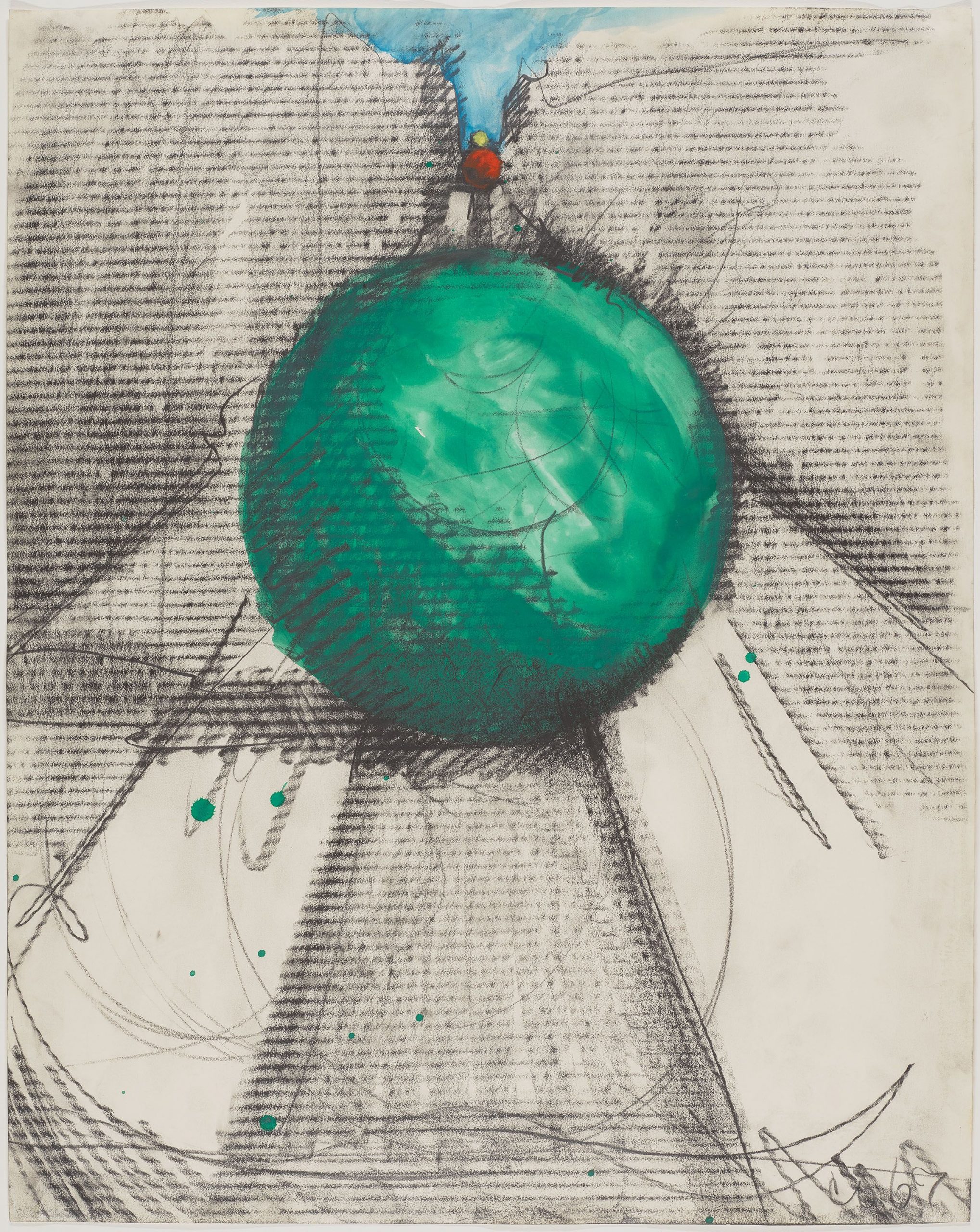 There comes a time in the moment of creativity where the artist goes so large that the ability to create such visions is rendered moot by reality.

“Dream Monuments: Drawing in the 1960s and 1970s” currently on display at the Menil Drawing Institute in Houston, Texas attests to such virtuoso gigantism.

This captivating exhibit focuses on drawings for purposed environmental art projects that were never made. After seeing the show you will wish they were completed.

The show itself was inspired by unrealized installations or Land Art funded by Dominique and John de Menil.

Consider a mastaba formed from one million oil barrels along the highway from Houston to Galveston. That was the concept of “One Million Stacked Oil Drums, project for Houston Galveston Area, 1970” in pencil and crayon with a map collage on the bottom right.

The enterprise conceived by Christo would be an Egyptian tomb structure seen in the distance from cars. The drawing reminds of the scenery of West Texas with its buttes that look like skyscrapers covered in vegetation.

Then there’s Claes Oldenburg’s “Proposed Colossal Monument for Park Avenue, New York – Bowling Balls, 1967” in pencil and watercolor that would turn Central Park and adjacent Park Avenue into a video game with a Godzilla-sized sports ball rolling down the boulevard.

Yet another metropolitan conceptual piece posits a recreated Statue of Liberty lying prone in Battery Park. Argentine conceptual artist Marta Minujin imagined a tourist attraction in 1979 that would exist within view of the actual Liberty Island ingénue.

Less than the size of a movie poster yet with omnipotent width this ink on vellum image conveys multitudes of information. It was drawn after the apocryphal images of the Statue of Liberty in “Planet of the Apes” (1968), a film that dismembered the iconic lady and placed her in a metaphorical purgatory, and the events of 9/11. Battery Park is spitting distance from the site of the World Trade Center.

When Minujin came up with this sardonic amusement park she could’ve been aware of “Planet of the Apes” but no way she foresaw 9/11.

Minujin’s drawing shows a line of people waiting to get in, walking within and existing all within a vast horizon that established the sea and background.

On a side note regarding “Apes” the entire Statue of Liberty half buried in seashore was a twist ending devised by Rod Serling that was different than the twist ending in the source novel by Pierre Boulle.

Looking at Minujin’s drawing was like having a flashback that encompassed the time I was actually walking along Battery Park in the 1990s mixed with my perceptions of the events that have happened over time.

I will never forget the tale of a former roommate who told of the time he visited the Statue of Liberty and had a traumatizing experience. To go up to the actual torch, the very tip top of the monument, one had to get in a line that crept up a winding staircase. My friend recalled that someone had spit from another level up and it landed on his hand holding onto the rail.

My first thought looking at “Estatua de la Libertad acostada” was that that would never happen with the hollow statue horizontal.

These are just a few of the 40 art works on display, all guaranteed to provoke thought. “Dream Monuments: Drawing in the 1960s and 1970s” runs until mid-September 2021.

All LED and display technology manufacturers should have artists in residence to show how ...