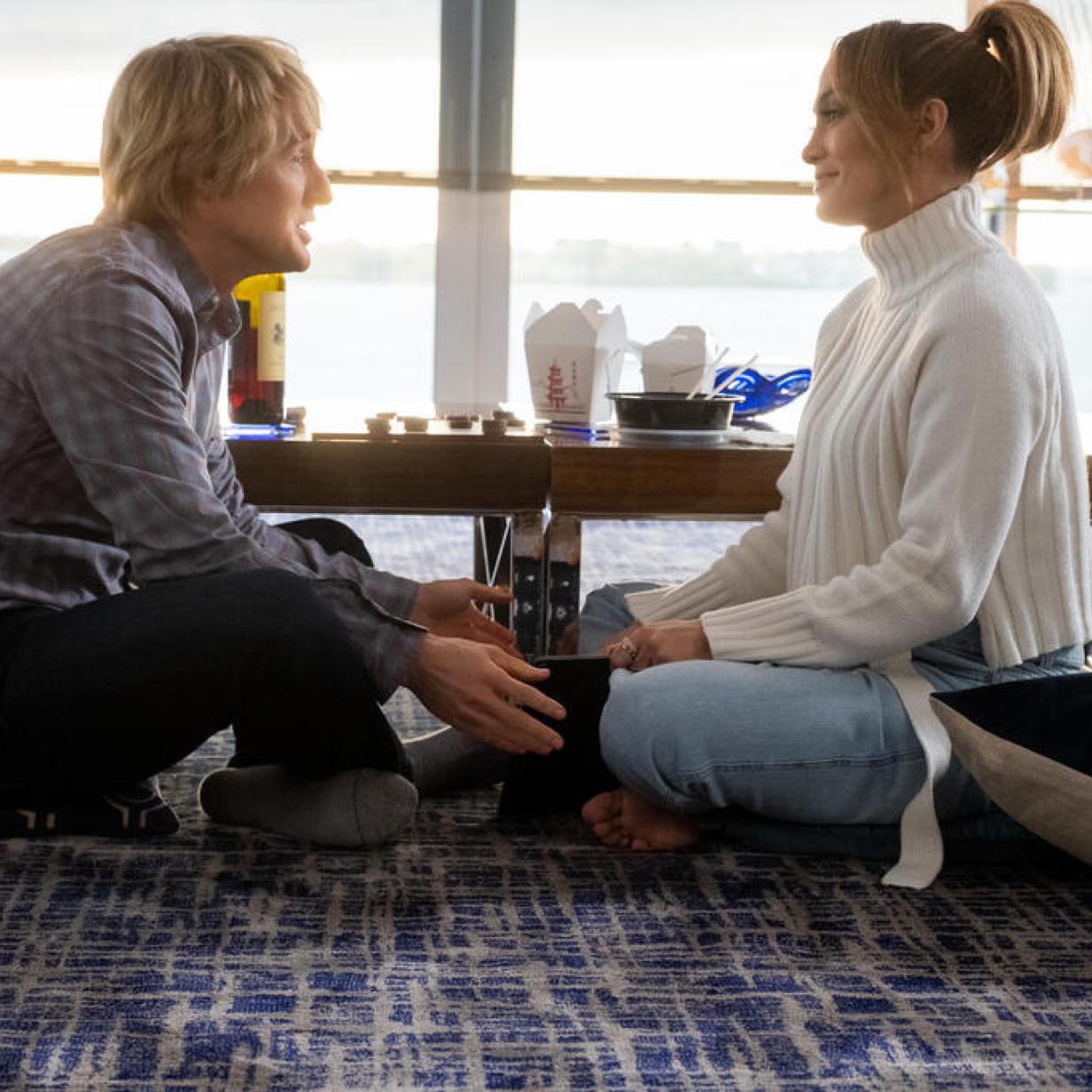 If this collection of Valentine weekend romantic comedies was a relationship it would be an instant break-up. It’s not hard to imagine random couples going to “Marry Me” or “I Want You Back” and abandoning the date.

“I don’t know what happened, she went for popcorn and never came back.”

This misconceived attempt at an a 1940s style romantic comedy misfires loud and often. At least “Marry Me” is consistent.

Jennifer Lopez plays a thinly veiled version of herself: a world famous recording artist who dumps her fiancee moments before a live marriage across multiple social media sites during a sold out Gotham concert. Owen Wilson, a math teacher at a public school, is the poor schmuck she marries instead.

Lopez sings every reel or so, so in a sense this is a modern version of an Elvis movie. It certainly has the brain cells of an Elvis film. J.Lo is Elvis and Owen Wilson is Shelley Fabares.

In the movie J.Lo commands an audience of fans who live through their cell phones, yet when she goes with Wilson to chaperone his school’s sock hop none of the kids have cell phones to record her impromptu musical interlude.

“Marry Me” wants to establish its own reality and then jettison that flimsy semblance to get a cheap laugh. Case in point: J.Lo decides to fly at a moments notice to recapture her true love in what the filmmakers must’ve thought was an homage to “The Wedding Singer” (a much better rom com starring Adam Sandler). Only she can’t book a ticket because the airline is sold out. She ends up flying coach.

The filmmakers have spent the previous hour depicting her as the world’s biggest female recording star and her manager can’t book a private jet?

“I Want You Back”

This even bigger misfire than “Marry Me” features two couples who all break up at the same time. “I Want You Back” introduces the leads in the first few moments breaking up: Charlie Day, Scott Eastwood, Gina Rodriguez and Jenny Slate.

By the time the opening credits roll a few minutes later you realize the film will never get any better.

In what it the film’s lamest yet sexiest scene Day hides in a towel basket at the foot of the bed while Eastwood makes love to his new girlfriend. There’s mucho Eastwood butt cheek on display.

I don’t want to see Eastwood’s ass and it doesn’t make up for his wooden acting. I want to see Jenny Slate’s ass. Twas not meant to be.

But there is an even lamer menage a trois between Slate, Rodriguez and Manny Jacinto where literally nobody gets naked even though they’re about to have a three-way.

Since it’s an Amazon film there’s not a lot of advertising for this title but if there were it would be false advertising.

“Blacklight” has a backstory that’s perfunctory but a thriller line that’s intriguing enough to sustain the movie. Neeson works off the books for the director of the FBI bringing in deep-cover agents that have gotten in trouble over their heads.

Think “Three Days of the Condor” skullduggery dumbed down to programmer level but not without its  action filmmaking rewards.

Aiden Quinn is Neeson’s handler and I didn’t even recognize Quinn, who has more white hair than Anderson Cooper. Quinn was himself was a top male ingenue of 1990s films. Neeson has no problem being recognized, he is and will always be one of the top action stars in movies ranking alongside stalwarts like Charles Bronson.

Decades from now Neeson will be looked at with the reverence that Humphrey Bogart commands, only “Blacklight” will be low on his list of credits. But at least it will be on a list.